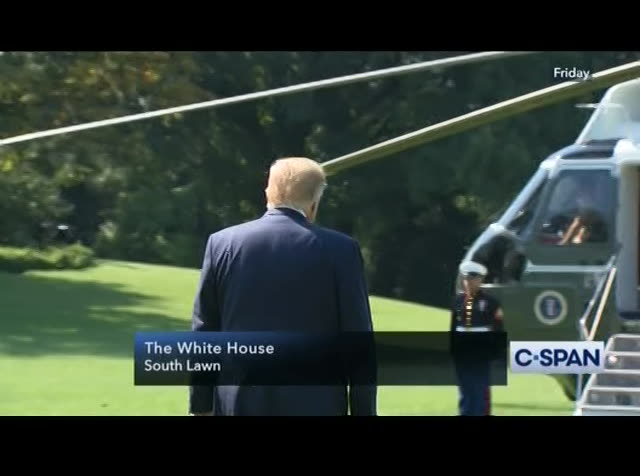 >> justin is a local reporter. good morning. happens this week ? where does it happen and who is involved? wednesday about 600 agents
4:06 am 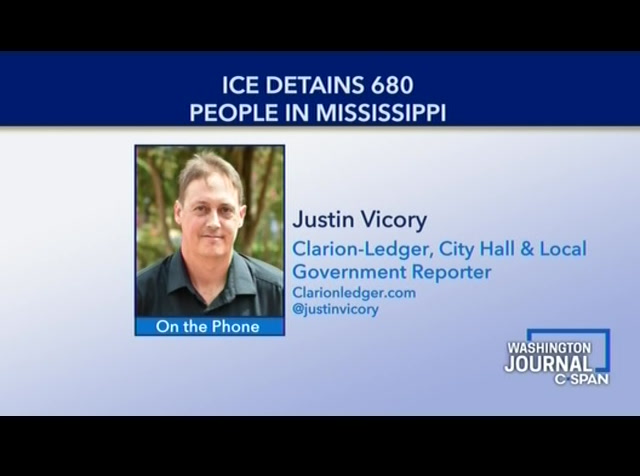 secret bynoticed kept the agents of federal prosecutors. rated about -- raided about seven food processing plants. chicken plants. anywhere from 40 to 100 miles outside of jackson, mississippi. mostly in small towns. 80 unauthorized 6 workers and brought them to a air national guard hangar next to the jackson airport where they processed them, fingerprinted them, and the next day they ended up releasing
4:07 am 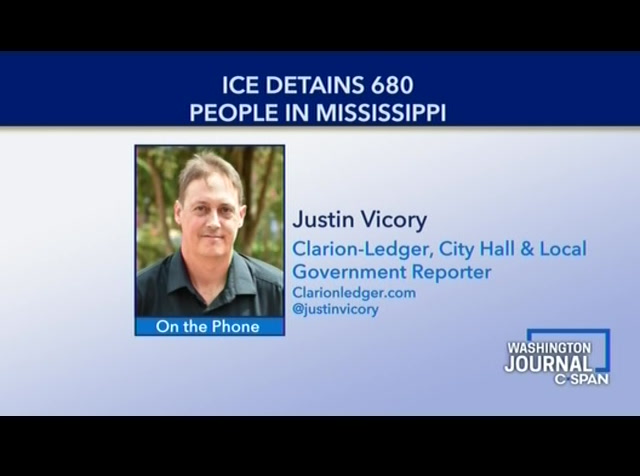 workers, andthose turned them back to the communities. 400 that wille to be moved to a federal facility in louisiana and processed and eventually deported. >> what has the reaction been throughout mississippi including the p no community, and what response are you expecting? it depends on the perspective. for the latino community it has been devastating. adding insult to injury for them, these raids happened on the first day of school. employees were
4:08 am 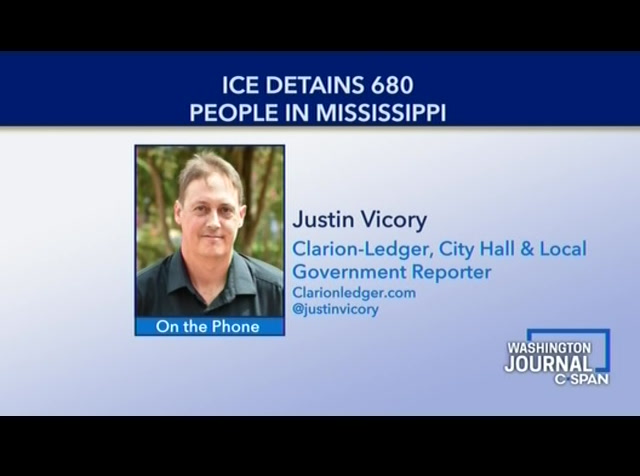 ,hipped off from the children the children did not know where their parents were. it was a bit of outrage from that perspective. a lot of people are heartbroken by what happened. politically it has been divisive. supporter,r, a trump has supported the raids as has the u.s. attorney who was appointed by trump. they call it a matter of law and order. meanwhile, the city of jackson, has taken amayor hard stance against the raids.
4:09 am

he calls it dehumanizing and a , and it willurces only complicate trust issues between the community and the law enforcement. it depends on who you ask. perspectiveive us on the reports we are seeing and hearing about the children, and that ice may not have contacted child protection services before these raids. we have seen the video on tv and heard the children who are trying. -- who are crying. developing tol get more details. there is a lot of misinformation out there. the child protection services says it was not contacted. that was confirmed, and the
4:10 am 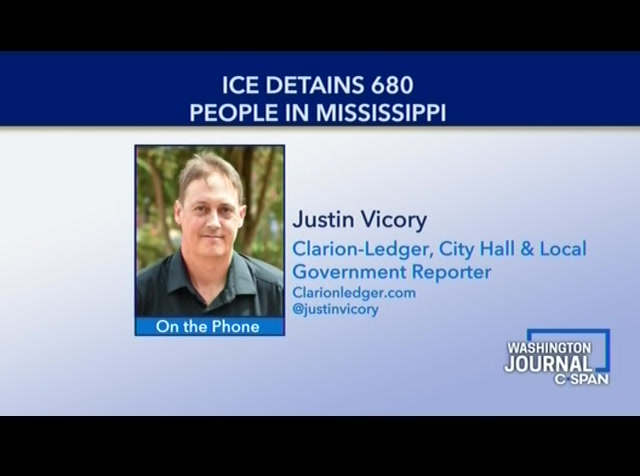 reasoning for that -- and ice officials actually -- the reason for that was that their plan was to keep it secret and not let anyone know about it. they made preparations for these released 30d they of those detained for what they called humanitarian reasons. because a lott is of them were parents of these children. we are getting conflicting reports. we are calling school districts to find out if these kids actually had someone to take care of them. so many reports say there are kids in the streets looking for their family with nowhere to go. ice is saying that is not the
4:11 am 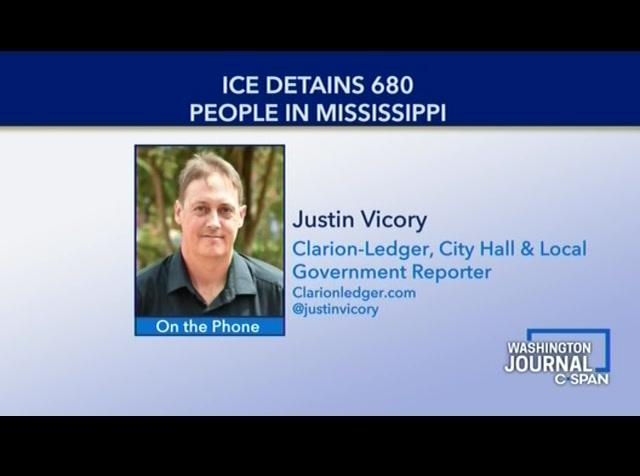 case. right now it is still developing . we are not sure what the situation is. >> give us a sense on the impact on the businesses. one manager said folks were taken out of there. what is the local impact in these communities, and whether these employers were using the e-verify system when they brought in these folks? talked to two we .f the larger companies claiming they used the e-verify system. a couple of smaller operators, we have not been able to reach.
4:12 am 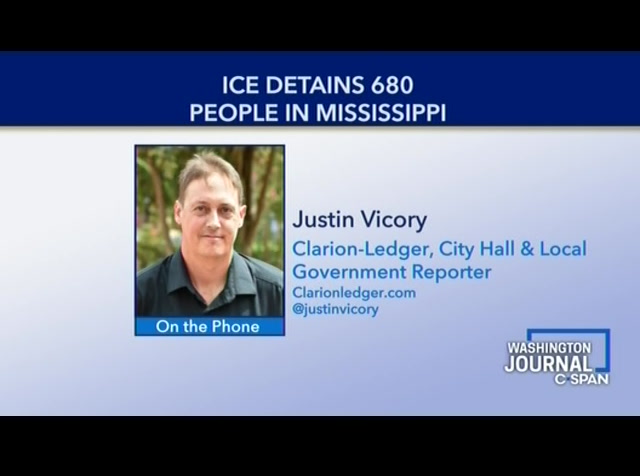 now will become if they were waiting for legal out, thereo figure are a lot of questions on what happens to employers, will they be arrested, that is information we are waiting to see. as far as the impact on the these are small mississippi towns. it will have a substantial impact on the towns. that is something we will follow up with today, we will go to these towns and talk to the business owners to get an idea how hard the impact will be. , thene thing to know
4:13 am 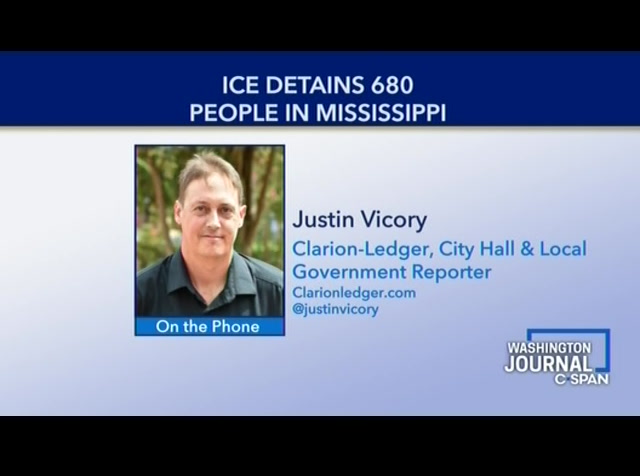 largest employers have ads out looking for employment and are not shy about letting people know they are looking to hire workers. vicory is a reporter for the clarion-ledger in mississippi. thank you for your time this morning. >> sure, thanks. >> c-span's "washington journal," live every day with news and policy issues that impact you. this morning, michael braga on the state of rural hospitals in states that did not expand medicaid under the affordable care act. former fbi agent talks about the role of law enforcement in combating domestic terrorism. and the christian science monitor on conversations about
4:14 am 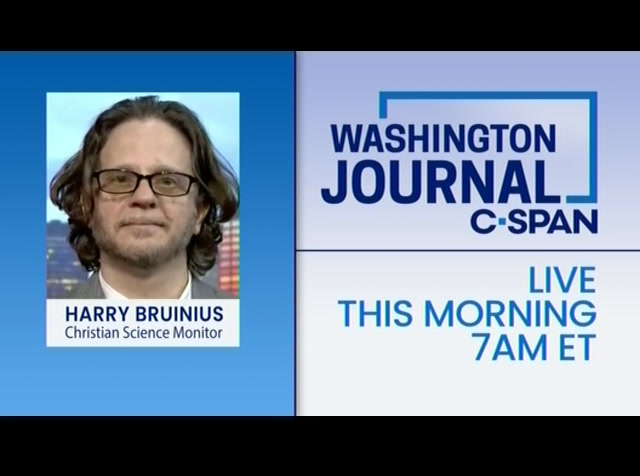 socialism. watch c-span's "washington journal," live at 7:00 a.m. eastern this morning. join the discussion. easternht at 8:00 p.m. on lectures and history, female activist in the 1960's civil rights movement. >> while women were instrumental in helping to organize and put the march together, the event was purely dominated by men. eastern, at 4:30 p.m. the global significance of the declaration of independence during and after the american revolution. >> multiple translations of our declaration and their way to venezuela other countries after 1776. a half-century known to scholars as the age of revolutions. >> at six luck p.m. eyewitness
4:15 am 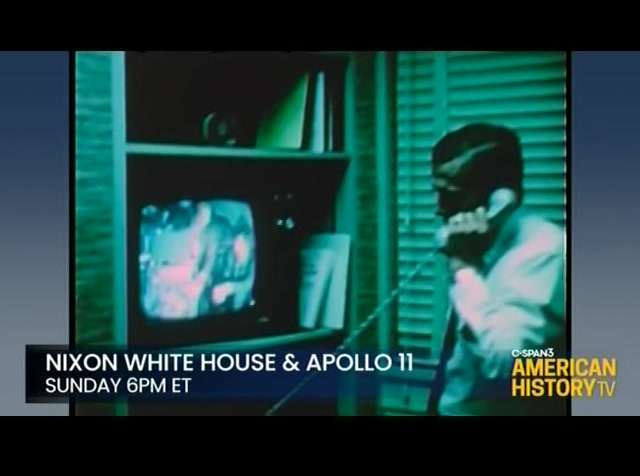 accounts from inside the white house during the apollo 11 lunar landing. >> we staked ourselves in the cabinet room. you can see the windows were dark. in theule landed at 4:15 afternoon, and the astronauts did not walk until later. >> american history tv, every weekend on c-span3. democratic presidential candidate and former hud secretary boolean castro spoke to voters at the iowa state fair. his remarks are about 40 minutes. [applause] mr. castro: good morning. it is great to be with y'all in des moines at the iowa state fair. first of all, thank you very much, rachel, and all those who helped organize this.
left
right
disc Borrow a DVD of this show DVD
tv